Pittsburgh to a Soapbox

Driving into the sun still feels strange. I programmed myself to go west when I started out, and apparently it stuck. I have to remind myself to put on my dark goggles in the morning now, instead of changing into them in the afternoon.

I buzzed out of Pittsburgh on 22, stopping at a Sheetz to get coffee and inspect the atlas. A passing biker asked me if I was lost, and I realized that sitting at a table with an open map, a phone, and my head in my hands probably made me look exactly that.

"No, just tired," I said with a smile. "Thanks." The no-sleep-in-Nashville situation was still wearing on me; this was my second coffee of the morning.

From 22, I took 53 north to 144 north, and stopped in Cross Forks for lunch. Everyone at Deb's was very friendly, including a pair of bikers at the bar, one of whom was a woman. She was only the second lady biker I've talked to in an entire month on the road, which blows my mind. She said her experience of other lady bikers is that most of them aren't friendly. She and Isabella were both wonderful, and they are the complete extent of my experience with female strangers operating motorcycles.

I've had lots of people, both men and women, say things like, "I'd be too scared to do that!" when I tell them about my trip. I've had several friends and relatives say they're proud of me for what I'm doing. I've gotten many, many comments along the lines of, "By yourself?!" and "On that?!"

I don't honestly understand what's so difficult about this project. Leaving home was the hardest part. Everything else, in comparison, has been cake. It doesn't require months of planning. It doesn't require thousands of dollars. It doesn't require four weeks of vacation; you can have an awesome experience in a few days. I just chose to make it longer because I had the opportunity. 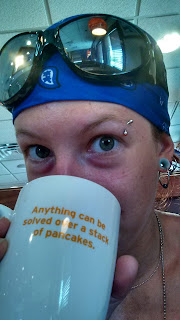 In that same vein, I don't understand why more women don't ride motorcycles. There is no reason that biking should be a man's world. You don't have to be able to bench 200 pounds to ride a bike (I can't). You don't have to spend an assload of money to own one (I didn't). You really don't need to be special in any way to get a motorcycle license, get on a bike, and go on the road.

It makes me wonder what this fear-mongering in society is trying to accomplish. People love to tell dark stories, but what's it doing to us on a large scale? It's killing the adventurous spirit. It's killing our willingness to see and learn new things, to meet new people, to have new experiences. It's taking away that which could make us a more peaceful society: meeting each other. In person. Face to face, not over the internet.

If you are even slightly interested in going on a trip, do it. Get out there. You don't have to go today, but if you don't take a step toward it today, how will you ever get there?

People will tell you all kinds of awful things in advance. They'll say you won't make it. That you'll get run over in traffic, eaten by a bear, and mugged by a criminal. Possibly all at once. They will raise their eyebrows, waiting for you to come crawling home in pieces, admitting that your venture was ill-conceived.

It was not. Sure, something bad may happen. Take reasonable precautions. Ride with care and carry some pepper spray and a backup phone. But don't stay home. Approximately 99.9% of the hundreds of people I met were wonderful, and even the .1% didn't present big problems for me.

Most of the people I spoke to seemed worried about all the other people. You know who wasn't worried? The long-distance bikers. They already had the experience to have learned otherwise. They didn't say, "Oh my god, you're doing what?" They said, "Ride safe."

The awful crap on the news every day has corrupted us into thinking that the world is a horrible place. It's easy to forget that the news media's job is to sensationalize, and that the stories they show us are news precisely because they are rare events. "Man Wishes Woman Well at Gas Station" wouldn't get them any viewers.

Doubt me? Check your confirmation bias. Stop looking for evidence that people are horrible and start looking for examples that they're awesome. You'll find it. You'll find more than you know what to do with. I promise.
Posted by Skipper at 13:43