The Bikes - the Madura

Sometime in June, I swapped bikes for a short ride with a friend who had just bought a brand new Suzuki Boulevard C90, a 1400cc shiny beast. Surprised to find us doing sixty in second gear, I saw for myself why touring bikes have large engines. 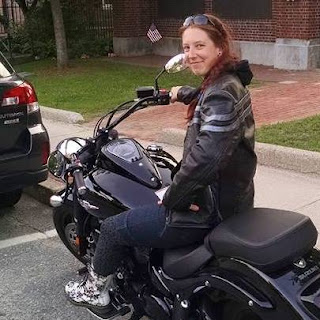 Abel has an uncanny skill for finding great deals on used things, so I asked him to keep an eye on Craigslist for bikes that were 800cc and up. He came to me one day and said there was a bike I should look at, a Yamaha 800 something-or-other for sale nearby. My interest disappeared when I learned that it didn't run, but having opened the website, I decided to have a peek around. The majority of things were either sport bikes (not my cup of gasoline) or shiny cruisers that were out of my price range. After several pages, I spotted a listing for a 1985 Suzuki Madura 1200.

I texted D and asked if he had any opinions to share on that bike. He said something about the carbs, then texted me back hours later and said he thought I had misspelled Marauder and had never heard of the Madura. It turns out they were only made for two years, and there are 7,000 of them in the entire world. I dragged home two of them, a "working" one and a parts bike. 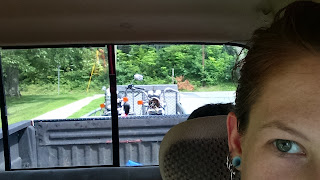 The seller told me it had been garaged for a bit over a year, and had bad gas and a dead battery, so I couldn't test-ride. I looked it over as best I knew how on my own and decided to trust him.

Once home, a new battery got it cranking, but it ran for about 8 seconds before puking gas all over the garage and shutting down. I got out the cat litter and started reading about the carbs.

The seller seemed like a good guy, so I've decided he honestly didn't know about the cracked swingarm, and it's my fault for not noticing it in the first place. Thank god Abel spotted it before I took it out on the road. That led to lots of puzzling and cussing and wrench-turning while we removed the rear half of the motorcycle.

We discussed getting it welded versus trying to put the one from the parts bike in its place. I got unreasonably frustrated with the entire project (I just wanted a working bike!) and put it on pause. I asked D to look over Kestrel and give her a thumbs-up or -down for going across the country. I listed options for acquiring other motorcycles if she got his disapproval.

Over dinner with my mom, who had just returned from a month-long trip to Italy, I whined about my self-induced motorcycle problems. She told me to take the swingarm off the parts bike ("isn't that why you have a parts bike?") and put it on the other one ("didn't you buy it for this trip?"). I said I didn't think I could get the carb cleaned and balanced with less than two weeks to go, and she suggested I have a professional do it (somehow I forgot that was an option). I returned home full of bike-fixing fervor.

Abel and I coaxed the good swingarm off the parts bike and onto the black one, over two entire days and with much sweating, swearing, and grease-wearing. I called the professionals and was told I could get my carb cleaned and balanced for $400, which was about twice what I was willing to spend. 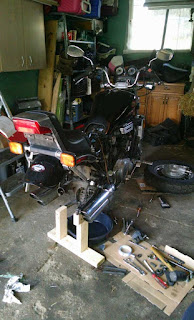 When I heaved a sigh and said it was time to figure out how to remove the "carburetor from hell," as I'd seen it called in the Madura forum, he said we should try to start it. I said it had already refused to start once and I didn't feel like cleaning up any more gas. He told me to just try.

What do you know...it ran. He may not be experienced, but I swear sometimes his faith in things works better than hours with a screwdriver. Unless you have heard a Madura with drilled-out baffles, I can't really describe the noise this things makes. It's a throaty, rumbly beast, with a demanding roar when the throttle is opened. After some other maintenance (rear brake pads and bleeding and a petcock swap), she was ready for a test ride.
Posted by Skipper at 11:14