I took the Madura for a spin late last night, not wanting its first ride to be on my way to work this morning. We made it a couple of miles before the running-out-of-gas coughing started. I pulled over, put it on reserve, and moved on. By the bottom of the hill, she was dead. I pulled into the bicycle lane, checked the petcock again, checked the level in the tank, ran out of ideas, and called Abel. 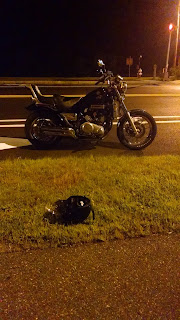 He brought a toolbox and a flashlight, and we started poking around. We were about to blame the fuel pump when he said, "I know what's wrong." In putting the tank back on after the earlier work, we'd pinched the fuel supply hose under the petcock. He freed it, and she started.

I was about to pull into traffic when the engine cut out again. I tried to restart and found the battery too dead for another attempt. We rolled her up the hill and tried pop-starting a couple of times, but no dice. A jump from the car battery got the electrical going again, but she still wouldn't run. That's when I remembered turning off the petcock to minimize leaks while inspecting the fuel pump.

After sorting out the Amateur Mechanic Derp, she ran fine. I took her to work this morning - about a sixty-mile ride - and ran out of gas with twenty miles to go, but fortunately did so downtown by a gas station. I'm considering naming her Zoom Couch (possibly shortened to ZC), because that's what the ride is like - a bouncy couch that wants to accelerate right out from under you.
Posted by Skipper at 11:27